This past week has seen some unedifying academic-on-academic hostility on Twitter, with a storm of haughty criticism being whipped up in response to publication in the journal Alternatives of a paper by Dr David A. Hughes. Perhaps because I know first hand what it feels like to be publicly smeared for touching on inconvenient questions, I have felt impelled to speak out against this intimidatory conduct.

Hughes’ paper tackles a taboo subject, one which has been at the centre of a great deal of conspiracy theorizing, much of it preposterous. What he nevertheless aims to show is that there are also reasonable questions to be asked about the subject; and he wants to understand why these have been lumped together with the foolish ones in a blanket dismissal by other scholars in the field of International Relations (IR).

The paper having undergone peer review and been published, it is now encountering public condemnation from a number of academics via their Twitter accounts. We see the makings here of a campaign to have the paper retracted or the editorial team censured.

Such conduct from professional colleagues requires an exceptional justification. For them to seek to overturn the result of peer review is tantamount to a vote of no confidence in the professionalism of colleagues who were involved in it. Very good reasons ought to be provided for such serious censure.

Scientists and scholars rely on the system of peer review – whose functioning itself depends on the good will and good faith of colleagues – to ensure that publications in their fields of expertise reach certain standards of methodological rigour and substantive significance. They do not assume that publication following peer review is an unequivocal endorsement of everything the paper claims. Once any article is published, it is quite likely to be subject to criticism, if it is of any interest at all, since the advance of learning inherently involves debate.

So peer review is a valuable process, but it is not an infallible guide to the quality of a publication above a certain threshold, and it does not provide the last word on the worth of a publication. I doubt there is any academic who could not point to some paper or other that, in their view, does not meet the threshold and so ought not to have been published. It is another matter, however, for a case to be made for seeking retraction of a published paper. Such a case would normally be grounded in provable claims of academic fraud of some kind.

It is normal, then, for academics to live with the existence of publications they disagree with or disapprove of. This is not an unalloyed burden, either, since such publications also provide convenient opportunities for academics to exhibit their own superior learning through their critical responses.

What has been more unusual until now is for outcomes of peer review to be challenged in public fora. Of course, before the advent of social media, there would have been little opportunity to do so. But now, papers that strike a nerve with disapproving readers can encounter public challenge via instantaneous reactions on platforms like Twitter.

Some of the responses to Hughes’s paper have expressed dissatisfaction at the publication in relatively measured terms.  For instance, Dr Nicholas Kitchen, a lecturer in International Relations at Surrey University posted several tweets, which included these:

Disagreeing with editors’ decisions is not uncommon, I think, but to go on to publicly denounce a colleague’s work in this way is quite another matter. Although Kitchen adds such a damning comment, he has not pointed to any specifics in the paper that warrant such opprobrium.

This lack of specificity, in fact, is a common feature of the attack tweets. An influential example is this Tweet from Professor Brendan Nyhan of Dartmouth College:

Other academics challenged the editorial board to retract or resign. See, for instance, this thread from Dr Emmett Macfarlane, associate professor in Political Science at the University of Waterloo.

The response by Dr Jennifer Mustapha, an Assistant Professor in Political Science at Huron University College, illustrates Hughes’s point that “critical” IR scholars have no time for the kind of uncomfortable questions he highlights.

Indeed, a further tweet from Macfarlane went so far as to call Hughes’s article the ‘antithesis of academic scholarship’. Thinking myself that this was a harsh judgement to make of any professional colleague, particularly when no grounds for it had been demonstrated, I intervened with a request that Macfarlane suggest better readings. In response he simply blocked me!

In the meantime, the journal’s editor had been alerted to the Twitter discussions and had issued a response, which Kitchen cites:

The quip added by Professor Alex Bellamy of the University of Queensland captures the tenor of many of the comments inserted by others into these twitter conversations.

A more aggressive intervention came from Dr Nour Halabi, a Lecturer in Media and Communication at the University of Leeds, with her proposal to boycott the publisher unless it bowed to the pressure of the complainants about this ‘truther’ and ‘conspiracy theorist’: 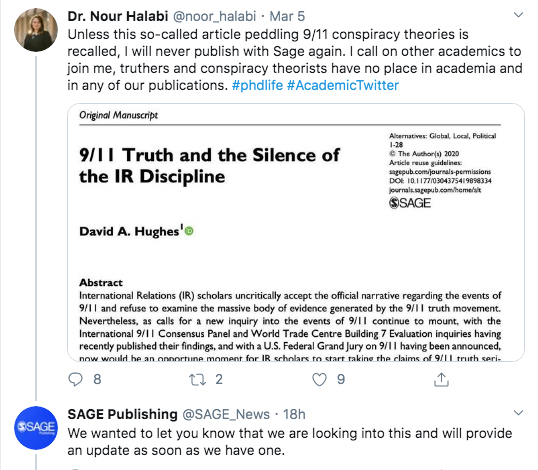 My view is that the approach of these academics on Twitter is indefensible. They smear the author and the paper while seeking to intimidate the publisher and send a public message that this topic ought to remain off-limits to any critical inquiry. The fact that the paper is seeking to reflect on how that taboo comes to be maintained is scarcely commented on by the critics. Those few who do mention it make a general complaint about this not being the right way to go about it – but without indicating what would be the right way. (A helpful recommendation is offered, though, by Roland Bleiker of a piece he co-authored with Tim Aistrope on Conspiracy and Foreign Policy, as a more subtle treatment.) I am not suggesting Hughes’ paper could not have been improved in any way, but I am concerned that none of the attacks on it has identified any specific scholarly defect, let alone anything close to the kind of fraudulence that would warrant retraction.

Certainly, raising questions about the circumstances of the destruction of the three World Trade Centre buildings in 2001 leads into very uncomfortable and disturbing areas of speculation, and reasons to avoid doing so are compelling – certainly pragmatically and psychologically. Such influential dissenters as Noam Chomsky have supported the position that such questions are better not asked, with even Julian Assange apparently saying “I’m constantly annoyed that people are distracted by false conspiracies such as 9/11, when all around we provide evidence of real conspiracies, for war or mass financial fraud.” This is surely an efficacious salve for the critical conscience of many of us. I wonder, indeed, what cognitive condition the vitriolic responses to a humble journal article by so many critical thinkers might betoken.

More humdrum questions about whether Hughes’s paper should have been published exactly as is are open to reasonable disagreement. But since it has now been peer reviewed and published, criticism should be made in appropriately academic terms, and not those of the playground bully, which some academics seem to feel themselves licensed to do on Twitter.

Regarding the substance of the paper, since I have not researched the topic myself, my comments will be limited to a few very general points.

If the IR community has not given much scholarly attention to those questions, then it seems to me that Hughes is right to suggest that they, and the reasons for the silence, are worth devoting a few journal pages to. Accordingly, in my view, the editor of Alternatives was right to put the submission out for review and then to accept the advice of the reviewers. Since their recommendation was to publish the article, any criticism of it now should be made in the way that academic criticisms normally and properly are.

Trying to shame the publisher into retracting the paper is not the way to uphold academic standards.

As for trying to shame a scholar who has the courage to engage in what the “critical” scholars seem merely to pay lip service to – namely, an attempt to speak truth to power – the academics in question ought, in my view, to be offering apologies. Hughes is well aware why it is that those relatively few ‘academics who have spoken out have tended to be emeritus or retired professors with little to lose career-wise’. It is because in virtue of doing so they can ‘expect to find themselves subjected to a media smear campaign as part of a coordinated effort to discredit them.’ Such attacks on a scholar’s reputation can be very damaging for younger academics with future prospects to put in jeopardy. So in standing firm in full awareness of all this, Hughes has responded with integrity to the pull of an intellectual obligation he feels to undertake academic due diligence regarding assumptions about a defining historical event of our epoch.

I would like to invite readers to share below their comments on either this post or Hughes’s paper. Naturally, I expect them to be respectful. (Any anonymous smears or abusiveness will be excluded during moderation.)