As representatives of almost every state in the world gather this week in The Hague, all eyes should be on them. The Organisation for the Prohibition of Chemical Weapons – whose conference they are attending – was mandated by the people of the world to play a vital part in reducing the evils of war.

Instead, it seems, the OPCW has been manipulated to serve the ends of warmongers.

Critics and non-Western nations arrived at this understanding some time ago. Key investigators at the OPCW have known it for a fact. Their knowledge was brought to light first by the leak of a suppressed report, then by firsthand testimony heard by an international panel, and now by Wikileaks’ release of an email in which an OPCW inspector expresses the gravest concern about intentional bias introduced to a redacted version of the report he co-authored. Crucial facts about the 2018 Douma chemical claims, he writes, “have morphed into something quite different to what was originally drafted.”

The Western media has concealed the problem because – bluntly – it is part of the problem. Journalists in established news outlets do not have the investigative autonomy that they would need to fulfil their calling.

But the news is out. In the Mail on Sunday, Peter Hitchens writes that what’s been uncovered “appears to be the worst instance of ‘sexing-up’ in support of war since the invasion of Iraq and Tony Blair’s doctored dossiers.” In Italy’s leading broadsheet La Repubblica, Stefania Maurizi puts the critical question: “Will the 2013 Nobel Peace Prize winning organization shed light on the whistleblower’s serious charges after this email?”

Hopefully, the questions will now be firmly pressed, and this post will carry updates as and when they are covered in the media. 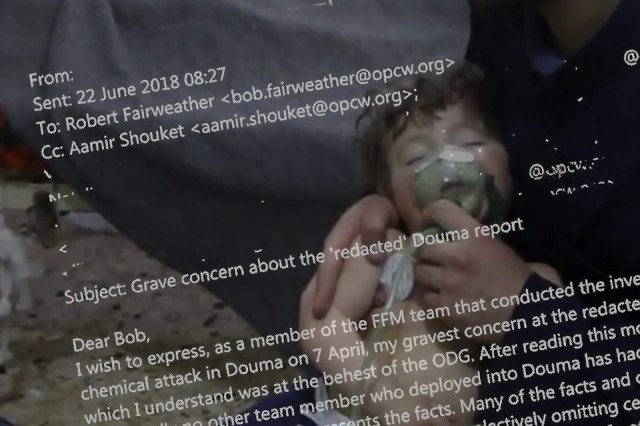